Posted in Negligence,Premises Liability on September 11, 2015 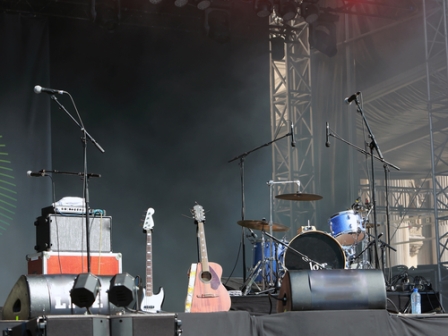 A professional musician who was injured when he fell from a stage while setting up equipment for his bass guitar prior to a performance, filed suit against the property owner.  The plaintiff alleged that the defendant was negligent, and that the premises were in a defective and dangerous condition, in that the configuration of the stage had significant gaps at the sides creating an unreasonable risk of harm.  The defendant moved for summary judgment, arguing that it owed no duty to the plaintiff to configure the stage in any particular way, and because the plaintiff assumed the risk of his injuries.

The trial court granted summary judgment, finding that the doctrine of primary assumption of the risk barred the claim, and rejecting the plaintiff’s contention that the gaps at the side of the stage increased the risk of falling. However, the court of appeal reversed, holding that the defendant had not met its initial burden of proof, and that even if it had, disputed issues of material fact remained concerning whether the defendant breached its duty not to increase the inherent risks:

To obtain summary judgment, Fairbanks had the initial burden of production to “make a prima facie showing of the nonexistence of any triable issue of material fact” … as to each element of its assumption of the risk defense, including not increasing the inherent risks Fazio assumed by performing on stage. …

Fairbanks, however, contended only that falling off a stage is an inherent risk of performing on stage. It did not attempt to show it had not increased the risk of falling and failed to present any evidence to refute Fazio’s claim its construction of the stage increased that risk. Fairbanks did not meet its initial burden to make a prima facie showing there was no triable issue of fact concerning this element of its defense. The burden, therefore, did not shift to Fazio to raise a triable issue of fact as to whether the stage posed risks beyond those inherent in performing on stage. … Because Fairbanks did not meet its initial burden, summary judgment was not warranted. …

Even if we were to conclude Fairbanks had met its burden of persuasion, shifting the burden to Fazio to show a triable issue of material fact, we would not conclude summary judgment was appropriate. …[D]isputed issues of material fact remain concerning whether Fairbanks breached its duty not to increase the inherent risks of falling from the stage. Fairbanks does not dispute the stage had large gaps at its sides and the evidence on the adequacy of the lighting in the room at the time Fazio fell was conflicting. In addition, Herns testified he had never seen a stage assembled with gaps at the sides and opined that as a result of the gaps the construction of the stage fell below industry standards. Construing this evidence in the light most favorable to Fazio, as we must, we conclude that a reasonable trier of fact could conclude Fairbanks’s placement of the stage increased the risk of falling.