Save Our Juries Website Launch: Aims to Protect Trial by Jury

July 4, 2014 – Mark P. Robinson, Jr. – founding RCRSD Inc. partner and national president of The American Board of Trial Advocates – is pleased to announce the launch of www.SaveOurJuries.org, a website to help visitors understand and appreciate the 7th amendment right to trial by jury – and why it’s in jeopardy. 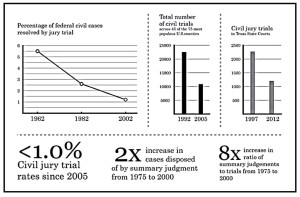 According to studies by the National Center for State Courts and other organizations, an alarming downward trend is occurring in the nation’s civil courts.  In 1962, 5.5 percent of federal civil cases were resolved by jury trial.  By 1982, the number had fallen to 2.6 percent, and by 2002 it was 1.2 percent.  Since 2005, the rate has been below 1 percent.  In 45 of the 75 most populous counties, the total number of civil trials fell 52 percent between 1992 and 2005.  Individual states show similar trends.  In 1997 there were 3,369 civil jury trials in Texas state courts, yet in 2012 there were fewer than 1,200.  According to an Oregon State Bar Bulletin, some counties in Oregon go years without having a single civil jury trial.

“American colonists understood the urgency and significance of the jury trial after experiencing a justice system without citizen participation,” said Robinson. “Unfortunately, this pivotal part of our legal system has diminished. We may not understand the significance until it’s too late — until we need this right and it’s no longer there.”

The mission of Save Our Juries is to educate the American public about the history and the value of our Seventh Amendment right to trial by jury.  The site explains how a how a judgment by ones own peers produces a more fair outcome, and why the justice system is for everyone, not just for those who have the means to pay for it.

Save Our Juries warns that civil juries are all that stands between an all-powerful government and its citizens. “ABOTA created Save Our Juries to educate and mobilize citizens in the fight to save our disappearing Seventh Amendment right,” Robinson added.  “Like any Constitutional guarantee, the right to a civil jury trial must be preserved, and we have to be prepared to fight to protect it.”