Premises Liability at the MGM

On October 1, 2017, a shooter committed the deadliest mass shooting in U.S. history killing 58 people and injuring thousands more during the Route 91 Harvest Music Festival in Las Vegas, Nevada.  From the Mandalay Bay Hotel, the shooter took aim at concertgoers within the Las Vegas Village, a concert venue owned by MGM.  Over 12 horrible minutes, the shooter was able to unleash thousands of rounds upon unsuspecting concertgoers.  Plaintiffs consisted of concert attendees and others at the Route 91 Harvest Music Festival at the time of the shooting who were killed, suffered gunshot wounds, and suffered other physical and mental injuries. 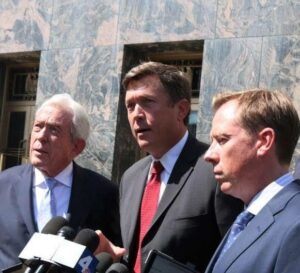 Robinson Calcagnie, Inc. represented over 1,400 of the approximately 4,000 victims in the private settlement.  In December 2017, Robinson Calcagnie was selected by a group of over 60 law firms with clients to co-lead the litigation against MGM, owner of the Mandalay Bay Hotel.  They filed first-of-their-kind lawsuits against MGM asserting premises liability, negligence, statutory violations, and other claims.  In essence, Plaintiffs alleged MGM’s failure to use industry standard precautions, security measures, and other reasonable measures was a substantial factor in creating a circumstance where the shooter was able to bring over 20 bags of firearms and ammunition to his hotel room and carry out the October 1, 2017 shooting.   Click here to see the operative complaint and the order granting motion for good faith determination.

Plaintiffs originally filed Sheppard, et al. v. Mandalay Bay, LLC on February 16, 2018, in the Eighth Judicial District Court for Clark County, Nevada.  The operative First Amended Complaint was filed on June 4, 2018, alleging ten state law claims for relief against MGM.  In response, MGM removed Sheppard to the District of Nevada based on the argument that the Support Anti-Terrorism by Fostering Effective Technologies Act, 6 U.S.C. §§ 441-444 (“SAFETY Act”) applies to insulate MGM from liability.  The SAFETY Act is a law that was passed in the wake of 9/11 that shields companies from liability that use security technology certified by the federal government to adequately protect against mass injury.  Although the SAFETY Act issue was fully briefed, it was never decided by the court.

MGM also filed a motion before the Judicial Panel on Multidistrict Litigation to centralize all the cases in federal court.  After briefing and oral argument, the Panel issued an order denying MGM’s motion to transfer and centralize.

Following a year and a half of discovery battles and hard-fought litigation, the parties agreed to mediation.  At the time of those discussions, the parties enlisted as mediators the Hon. Jennifer Togliatti (Ret.), formerly of Nevada’s Eighth Judicial District Court, and the Hon. Louis Meisinger (Ret.), formerly of the California Superior Court in Los Angeles, in hopes of reaching a settlement that might afford the thousands of Plaintiffs some measure of compensation, and bring all parties peace.   Mediation before Judges Togliatti and Meisinger began in February 2019 in Las Vegas and lasted several weeks.

The parties ultimately agreed to a global settlement in an amount between $735,000,000 and $800,000,000.  The mediators were appointed by the Court as Claim Administrators and Special Masters pursuant to Nevada Rules of Civil Procedure Rule 53, which permitted them to oversee the division and distribution of the Settlement proceeds.   Through months of additional hard work, the Claim Administrators and Claims Processor created a protocol and claim allocation methodology (“Claims Protocol”), which was reviewed and preliminarily approved by the Court, allowing all Plaintiffs to be adequately compensated.

On September 30, 2020, as there were no objections or oppositions to the settlement, the Court entered an Order granting a good faith settlement determination pursuant to NRS 17.245.  At the hearing, Judge Bell praised the “very thoughtful, careful way” the settlement accounts for different injuries and said it works “to recognize each of the victims.”  She added, “I think you all have done a fantastic job, and it’s very well considered.”

The settlement marks a first-of-its-kind outcome for a mass-shooting event in U.S. history.  It will hopefully encourage the hotel industry, the firearms industry, and other corporations to take measures to protect consumers and third parties when they have knowledge that intentional torts were likely or reasonably foreseeable.

In March 2021, Mark Robinson, Jr. and Daniel Robinson were honored as the Daily Journal’s “California Lawyers’ Attorney of the Year” (CLAY Award) for their work on the One October Shooting cases (see the attached article regarding the CLAY Award).

Robinson Calcagnie, Inc. attorneys Wes Polischuk and Michael Olson, as well as paralegal Jen Rogers, were instrumental in achieving this incredible result for our clients.